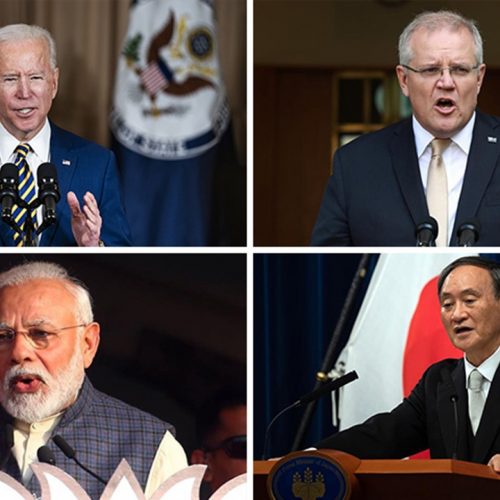 Prime Minister Narendra Modi attending the first-ever in-person summit of the four leaders of the Quadrilateral Framework (Quad) in the Indo-Pacific on Friday in Washington, in many ways, is the highlight of his visit to the U.S., where he will also address the United Nations General Assembly.

U.S. President Joseph Biden had convened a virtual Quad summit with Mr. Modi and his Australian and Japanese counterparts, Scott Morrison and Yoshihide Suga, in March. And he has been keen to hold a physical meeting at the earliest, brushing aside the Tokyo’s reluctance to send Mr. Suga, as he has announced he is stepping down.

Experts say this indicates the U.S.’ intention to show its “America is back” plan with a proactive strategy on the Indo-Pacific, even as it faces criticism for the manner of its pull-out from Afghanistan. There has also been some surprise over the emergence last week of the new trilateral, the Australia-U.K.-U.S. AUKUS Indo-Pacific grouping, which could overshadow the geo-strategic aspects of the Quad, with questions raised about whether the Quad will become “Quad-lite”, dealing mainly with global social issues such as climate change, COVID-19 vaccines and supply chain resilience, while the U.S. allies, who are treaty partners, work on the stronger strategic sphere together.

Above all, the Quad summit is expected to show all the four countries as part of a strengthened coalition of “democratic polities, market economies and pluralistic societies”, as External Affairs Minister referred to the grouping in a recent speech.

Free and open Indo-Pacific: While the first iteration of the Quad grouping in 2005-2009, formed in the aftermath of the Asian tsunami, focused on friendly maritime exercises and HADR (Humanitarian Assistance and Disaster Relief), its reprise in 2017 has focused much more on the threat to the Indo-Pacific maritime sphere, mainly from unilateral actions by China on the South China Sea and other disputes. At the March summit, a joint statement issued by the leaders, called the “Spirit of the Quad”, said they would promote a “free, open rules-based order, rooted in international law to advance security and prosperity and counter threats to both in the Indo-Pacific and beyond.” Clearly, given growing tensions between China and each of the Quad countries in the past year, as well as the U.S.’s increasing rhetoric over Taiwan, there is bound to be strong language on this count.

Connectivity and infrastructure projects: The 2017 Quad meetings of officials followed that of the Belt and Road Initiative, and the grouping was seen as an economic challenge to China as well, as Quad statements promised joint connectivity projects and transparent infrastructure funding for countries in the region in danger of being “debt-trapped”. The Donald Trump administration also launched its “Blue Dot Network” (BDN) as a way to grade project sustainability. However, these efforts have lost salience, given that joint projects such as the India-Japan MoU for the East Container Terminal in Colombo port was scrapped by Sri Lanka, differences between Australia and Japan, with India over joining the Asian economic trade agreement RCEP (Regional Comprehensive Economic Partnership), and the change in U.S. government has meant BDN plans are moving more slowly.

Countering COVID-19: During the March summit, the Quad countries announced plans for a “vaccine initiative”, which involved the production in India of a billion Johnson and Johnson (J&J) COVID-19 vaccines with U.S. funding and technology, and Australian and Japanese distribution in the Indo-Pacific countries needing it the most, by the end of 2022. This was essentially a philanthropic effort, devised when all the four Quad countries seemed confident of controlling the pandemic situation in their respective countries. While plans for the initiative are still on track, the second and third waves in India, U.S. and Australia have derailed the focus, somewhat, and India’s decision not to sign indemnity waivers for the U.S.-made vaccines has meant some bad blood with manufacturers like J&J. The Modi government had to cancel its commercial and donation (vaccine Maitri) vaccine export programmes in April and has yet to restart them. The Quad summit this week will be watched closely for a possible endorsement of the India-South Africa proposal at the WTO for patent waivers for COVID-19 medicines and vaccines.

Critical technologies and resilient supply chains: The Quad also set up a working group on critical and emerging-technology “to facilitate cooperation on international standards and innovative technologies of the future”. This will involve discussions on ensuring consensus on what kind of 5G networks the Quad countries will promote, on data security and free flow, as well as on building supply chains that have been destroyed due to the Coronavirus pandemic, as countries withheld crucial material needed by others due to shortages within. The results of the working group meetings will be presented at the summit, although it remains to be seen how much India, which walked out of the Japan-led “Osaka track” on data flows, will sign on, especially after differences with the U.S. over the ban on Mastercard, other international banking organisations for breaking local data storage rules.

Climate change: This is another of the “working group” silos set up in March that is due to be discussed by the leaders. U.S. special envoy John Kerry has been on a whirlwind tour around the world, including India, trying to raise various countries’ climate ambitions. The U.S. will be keen to see some commitments coming out of the Quad summit, ahead of the next U.N. Climate Change Conference, COP 26, in Glasgow in November. In particular, the leaders are expected to discuss specific goals to be included in their Nationally Determined Contributions (NDCs), like NetZero plans for carbon emissions, deadlines to end coal usage for thermal power plants and renewable energy goals, like India’s plans to build 450 GW of renewable energy capacity by 2030. It also remains to be seen whether the U.S. signs on to the India and France-led International Solar Alliance (ISA), which Japan and Australia have ratified during the summit.

While the Australia-U.K.-U.S. trilateral pact announced on September 16 to develop nuclear-powered submarines, is not expected to be on the formal agenda of the Quad summit this week, it has already overshadowed the event, and an expected bilateral between Mr. Biden and Mr. Morrison with a formal signing of the defence pact just a day before the summit is likely to be a major highlight. India has made no statement on the AUKUS pact for a number of reasons. To begin with a nuclear pact in the Indo-Pacific, as the AUKUS envisages, is clearly a much stronger message to China than the Quad’s strategic statements have been thus far, and likely to elicit a stronger reaction.

Even as the AUKUS announcement was being made, Mr. Modi was attending another strategic grouping, that of the Shanghai Cooperation Organisation (SCO), which includes Russia, China, Pakistan, Iran and Central Asia, and India has made it clear it intends to keep its geo-balancing between the two.

Not just China, which reacted sharply to the AUKUS announcement, but France, a close Indian partner, has been outraged by the announcement, which effectively kills a 2016 Australia-France agreement to develop diesel submarines. France has called AUKUS a “stab in the back”, recalled its Ambassadors from Australia and the U.S., and cancelled a meeting of the India-Australia-France trilateral planned this week as well.

Finally, while India will not object to a grouping that enhances the defence of the Indo-Pacific region, it is not comfortable with any kind of proliferation, which the submarine pact represents. Given the worldwide consternation over Iran’s nuclear programme, and India’s specific concerns about China-Pakistan-North Korean nuclear cooperation, South Block may prefer to be discreet about the new AUKUS alliance.

Another issue that this could spin off behind the scenes of the Quad summit is the question whether the Quad should be expanded to include other partners, some of whom India is already working with on the Indo-Pacific, including the U.K., European Union and South Korea. While Quad members have repeatedly said this has not come up for discussion, it is no doubt a subject of speculation.