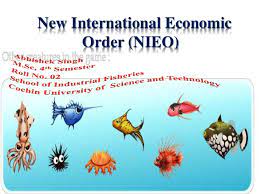 The non-aligned countries were more than merely mediators during the Cold War. The challenge for most of the non-aligned countries — a majority of them were categorised as the Least Developed Countries (LDCs) — was to be more developed economically and to lift their people out of poverty. Economic development was also vital for the independence of the new countries. Without sustained development, a country could not be truly free. It would remain dependent on the richer countries including the colonial powers from which political freedom had been achieved.

The idea of a New Inter – national Economic Order (NIEO) originated with this realisation. The United Nations Conference on Trade and Development (UNCTAD) brought out a report in 1972 entitled Towards a New Trade Policy for Development. The report proposed a reform of the global trading system so as to:

Gradually, the nature of nonalignment changed to give greater importance to economic issues. In 1961, at the first summit in Belgrade, economic issues had not been very important. By the mid-1970s, they had become the most important issues. As a result, NAM became an economic pressure group. By the late 1980s, however, the NIEO initiative had faded, mainly because of the stiff opposition from the developed countries who acted as a united group while the non-aligned countries struggled to maintain their unity in the face of this opposition.