The growth story of Gujarat is one of a state punching above its weight. With only 6 per cent of India’s land mass and barely 5 per cent of its population, Gujarat has managed to account for 7.6 per cent of the country’s GDP and 22 per cent of its exports. Its annual Gross State Domestic Product (GSDP) growth from 2001 to 2013 (growth has slowed down since) averaged nearly 10 per cent, which is faster than India’s. This is an extraordinary accomplishment. Between 1980 and 2013, Gujarat grew at an average rate of 5.1 per cent. If Gujarat were a country with a 10 million-plus population, this would be the third-fastest growth rate in the world, after China and South Korea.

What were the factors that helped Gujarat accomplish this extraordinary growth? Was it geography, native entrepreneurship, a historical edge in commerce and trade or simply good governance? The reasons for Gujarat’s growth can be debated. Did the fact that Gujarat has the longest coastline-1,600 km-contribute to its rapid growth? Gujarat has served as an integral native trading hub for centuries, one of the most dominant in the Arabian Sea. After all, in India, most coastal states have shown higher growth than the BIMARU (an acronym for Bihar, Madhya Pradesh, Rajasthan and UP, referring to their poor economic standing) states. A coastal state has the twin advantages of greater global access as well as lower transportation costs. Other coastal states, such as Maharashtra, Tamil Nadu and Kerala, have also performed well. But sustaining rapid growth, as Gujarat has done, is not easy. Almost 25 per cent of India’s sea cargo passes through Gujarat’s ports. 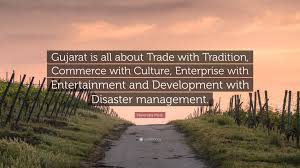 Gujarat has been among the fastest growing states even in the past. Despite poor rainfall, it has made strides in agriculture. Unlike Punjab and Haryana, states which launched the first Green Revolution with government support, Gujarat’s agricultural transformation came via the market route. Cash crops such as cotton, oilseeds and tobacco dominated the farm growth story. A milk revolution and largescale exports of fish accompanied the growth in horticulture and sharp increase in agricultural productivity. The agricultural turnaround-with growth rates as high as 11.1 per cent between 2000 and 2013-was accomplished despite water scarcity.Gujarat knows the art of turning every calamity and tragedy into an opportunity. Despite the plague in Surat and the earthquake in Kachchh, the state’s economic growth rate has surged in the last one-and-a-half decades. The good governance story of Gujarat, however, takes a knock when it comes to inclusive growth and social sector development. Gujarat is a ‘model state’ in economic growth but a ‘middle state’ in social sector growth. Both agricultural and manufacturing growth is in double digits, but of the 20 major states in India, Gujarat’s ranking is always between 9 and 12 on all major social sector rankings. This is irrespective of how the measurements are done. Education, health and other social sectors have grown much more conservatively. The challenge for the leaders in Gujarat is finding ways to bring about inclusive growth, alongside the remarkable growth rate.

Tele Communications and IT

Telecommunications and IT have played a key role in increasing work efficiency and enhancing public accessibility through e-governance. Gujarat Government focuses on growth and development of new & emerging technology areas. It has been increasingly using the ICT (Information and Communication Technologies) to offer citizen based service as per convenient location with an initiative to improve the reach, make services more transparent and reduce response time with reducing costs. The Government is also pro active in its Initiatives and ranks first state in the country to have made e-Governance functional in all its Municipalities and Municipal Corporations.

State Govt. has adopted Innovative, constructive and result oriented progressive policies for the promotion of e-governance in the State. Through the Nodal Agency, the Government’s Science and Technology Department positions Gujarat, as a Key State in the Knowledge Economy sector and acts as a medium to make Government-Citizen Interface more effective, transparent and efficient.

Gujarat is an aspiring leader with e-readiness Initiatives with the IT Policy 2006-2011. Independent agencies have ranked Gujarat amongst the top five States in terms of e-readiness. For its Network Policy and E-governance, Network Learning, Network Access and Network Society.

The Gujarat Industry has been completely revolutionized with respect to its visual aspect and also infrastructure in the last 42 years since the dawn of the state itself in 1960. Post its revival, there has been no looking back for the Gujarat Industry. The entire credit for lifting up Gujarat’s industrial status and also for providing encouragement and assistance to the companies from Indian soil as well as foreign turfs who want to become an integral wing of the Gujarat Industry, goes to the State Government.
The Gujarat Industry has not only flourished in various fields but has also furnished employment to a major bulk of the masses. The appendages of the industry of Gujarat that deals in cotton and non-metallic mineral products are the prominent juggernauts who have created maximum employment opportunities.
Another train of industries are waiting in the pipeline to be unleashed so that they can take over the Gujarat market by storm. These industries include petrochemicals, chemicals, engineering, fertilizers, electronic goods and many more.

Gujarat is considered the petroleum capital of India due to presence of large refining capacity set up by private and public sector companies. As of December 2015, Gujarat ranked second in the production of crude oil (onshore) in India. The state produced 3.32 million tonnes of crude oil, which accounted for 24.7 per cent of the total crude oil (onshore) production in the country till December 2015.

The state has excellent infrastructure as compared to other states. Provide good opportunities in the trade and commerce sector. There are 45 ports, 18 domestic airports and one international airport. There are 106 product clusters and 60 notified special economic zones (SEZs). Large scale investment is expected in Gujarat as part of the US$ 90 billion Delhi-Mumbai Industrial Corridor (DMIC).