The Human Development Index (HDI) is a summary measure of average achievement in key dimensions of human development: a long and healthy life, being knowledgeable and have a decent standard of living. The HDI is the geometric mean of normalized indices for each of the three dimensions.

The index was developed by Mahbub-ul-Haque along with Amartya Sen which is used by the United Nations Development Programme (UNDP) in their annual report since 1990.

Its goal was to place people at the centre of the development process in terms of economic debate, policy and advocacy. This report ranks the countries on the basis of the Human Development Index.

Human Development Index for Indian States have also been calculated depending on the data collected from various sources for  Indian states.

It measures the average achievements in a country in three basic dimensions of human development:

Health (A long and healthy life)

The mean years of schooling of the adult population (aged 25 years and above) are estimated using the NSS data on educational status and training in India. The same data source is used to obtain estimate of Atkinson inequality in levels of education. Estimates of school life expectancy are made based on the NSS unit record data on education in India

HDI used estimates of Atkinson measure of inequality based on the NSS unit record data on per capita consumer expenditure distribution for the year 2004-05 as proxy for corresponding inequality estimate of income.

HDI value for state of Gujarat in 2015 was 0.616, which places the state in middle income state. It ranks 11th in the Indian states.

Performance of the Social sectors as linked with the wellbeing of the people becomes key to State Human Development.

The State aims to become a model State on all fronts of Human Development. Every single person in the State, irrespective of gender, caste or creed would:

The State Government has established an autonomous body “Gujarat Social Infrastructure Development Society (GSIDS)” to improve the living standard of the people at large. The Society has Governing Body consisting of 10 members. Principal Secretary (Planning), General Administration Department is the Chairperson of GSIDS.

GSIDS has undertaken the preparation of District Human development report for all 33 districts in the state.

Further DHDR for eight districts; i.e. Vadodara, Dahod, Rajkot, Bhvanagar, Amreli, Gandhinagar, Anand and Valsad District DHDR are planned to be published by the end of the year 2016-17. The District Human Development Report for newly created seven districts are under preparation and will be finalized during the year 2017-18. 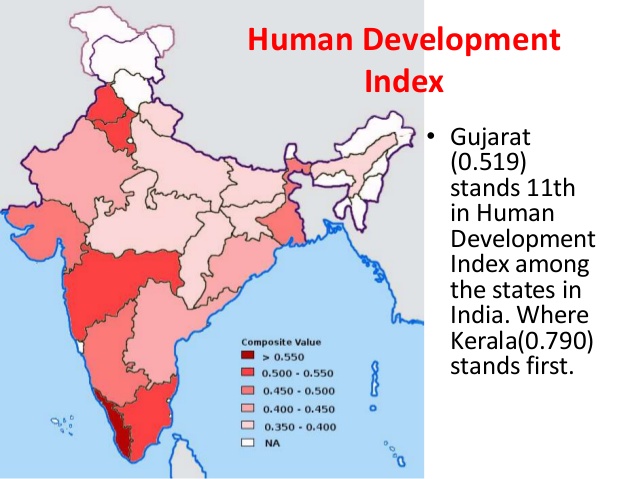 Since 2013, Government of Gujarat (GoG) has been involved with a project initiated by erstwhile Planning Commission-UNDP (presently NITI Aayog), called ‘Human Development: Towards Bridging Inequalities’ (HDBI). A project steering committee under chairmanship of Hon. Principal Secretary (Planning) has been formed.

On the basis of gap analysis from the DHDRs, focus areas are being identified. Accordingly, District Human Development Plan (DHDP) are being prepared. DHDPs have been finalised for Bharuch, Kheda, Narmada, Navsari, Sabarkantha, Tapi, Mahesana and DHDPs will be finalised by March-2017 for the remaining 26 districts.

In order to encourage institutions to develop and incorporate courses on Human Development in academia, three workshops/seminars were organized at Sardar Patel University-Anand, NICMGandhinagar, and CHARUSAT-Changa in collaboration with Higher and technical Education Department.

To encourage the Taluka Centric Approach as well as the bottom of planning process in decentralized district planning, Gujarat has initially decided to prepare Taluka Development Plan (TDP) for one Taluka (33 Talukas) from each district.

Impact Evaluation of flagship scheme of Developing Talukas has been undertaken, in order to assess the utilization of funds and achievement of progress in the identified indicators in the respective talukas.

Government of Gujarat has empanelled 22 Subject Specialists/ Consultants to initiate Third Party Evaluation studies by various Departments to assess the efficiency and effectiveness of various government schemes and programs.