What is Doklam issue ?

·        Sensors in Andamans to monitor earthquakes 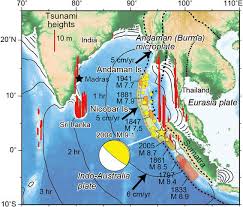 panchayat covered under the BharatNet phase 1.