A race is a grouping of humans based on shared physical or social qualities into categories generally viewed as inherently distinct by society. India is a multicultural country. Anthropologists are committed to grasping the dynamics of communities and populations. As anthropology combines the premises of a biological as well as well as socio-cultural study, it looks at the diverse sections of human beings with dual perspective, one derived from its branch called biological anthropology, and the other from social/cultural anthropology.

Guha has classified the races in India as:-

Represented by the Kadars, Pulayans (Cochin and Travancore, Irular and Primitive tribes of Wynad. They are considered to be autochthones of India.

This type is represented by Urali (Travancore), Baiga (Rewa), the tribal groups – Chenchu, Kannikar, Kondh, Bhil, Santal, Oron belong to this group. Their morphological features wavy hair is different form the Negritos who are having frizzly or woolly hair.

They comprise three distinct racial types base on their stature, head, complexion etc.
(a) Palaeo-Mediterranean: They have medium stature, dark skin with slight built. The head is long narrow and vault high with bulbous forehead and slightly projecting occiput. Face is usually narrow, prominent, moderately broad and fleshy. Facial and body hair are scanty. The representatives of this type are the Tamil, Telugu Brahmins and Nayars.
(b) Mediterranean proper: They are characterized by long head with arched forehead, long face, narrow and prominent nose, tall to medium stature, light skin color. They have plentiful body and facial hair, dark hair and eyes brownish to dark brown, chin is well developed. The true representatives are the Numbudiri Brahmins of Cochin, Brahmins of Allahabad, and Maratha women of Indore. The Bengali Brahmins also show this type of characteristics. Probably this type was responsible for the building up of Indus Valley Civilization.
(c) Oriental: This is the latest of the Mediterranean to enter India. It is very similar to the Mediterranean type but differs in the nose which is long and convex. Skin color is of light. They have always been concentrated in Asia Minor and Arabia from where they must have come to India. Their typical representatives are in Punjab, Rajputana and Western Uttar Pradesh.

it is believed that more than one type of broad headed ethnic type entered into the compositions of Indian people. They can be distinguished into three types:
(a) Alpinoid: Characteristics of this type include brad head with rounded occiput, prominent nose and round face. Their complexion is lighter than that found among Mediterranean. Body and facial hair are plentiful. Body is strongly built. They are represented by Bania of Gujarat, the Kathi of Kathiwar and the Kayasthas of Bengal etc.
(b) Dinaric: They are taller in stature with dark skin, hair and eye color. They are characterized by broad head, with rounded occiput and high vault. Nose is very long and often convex. Face is long with forehead receding. This type is well represented in Bengal, Orissa and Coorg. These typical representatives include Bengali Brahmins and Kanarese Brahmins of Mysore.
(c) Armenoid: They show strong similarity with Dinaric. They, however, are characterized by broad head, narrow nose with depressed tip. Their occiput is more marked and nose more prominent than the Dinarics. Tawny white skin color and they are short to medium stature. Parsis of Bombay are typical representatives. Besides Bengali Baidyas and Kayasthas exhibit features. 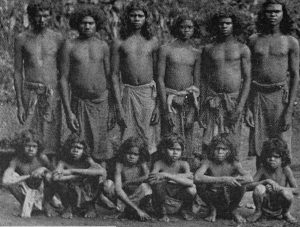 They are believed to have come from Central Asia, Turkistan or a little west of the region. They entered India through North-west and settled in Punjab (2000 B.C). They are characterized by long head with arched forehead and protruding occiput. Their face is long with strong jaw; nose is fine, straight and narrow. Moderate to tall stature with robust body built and fair complexion. Their eyes have bluish or greyish tinge.