Officially known as the Kingdom of Saudi Arabia, the country of Saudi Arabia is the world’s number one oil exporter and the country with the largest amount of oil reserves. Formed in 1932, the country was responsible for 17% of global oil exports in 2015, totaling $133.3 billion in value. The country is located on the Arab peninsula and is comparable in size to Alaska.

The massive, transcontinental country of Russia is the world’s second-largest oil exporter. In 2015, Russia’s oil exports accounted for 11% of global oil exports, exceeding a value of $86 billion. As a size comparison, Russia is twice as large as the entire United States.

Initially formed in 1932, Iraq is the world’s third-largest exporter of oil. In 2015, Iraq exported $52.2 billion worth of the commodity, which accounts for 6.6% of global exports. Located in the Middle East, Iraq is comparable in size to California.

Number four on the list is the United Arab Emirates (UAE). Located on the Arabian peninsula, the UAE is approximately the size South Carolina. In 2015, the UAE exported 6.5% of the world’s total oil exports, accounting for $51.2 billion.

The northernmost nation in North America, Canada is the world’s fifth-largest exporter of oil. In 2015, the country exported $50.2 billion worth of the commodity, or 6.4%. Due to the size of the Athabasca oil sands, it is estimated that Canada has approximately 13% of the world’s oil reserves. These reserve levels are only topped by Venezuela and Saudi Arabia. 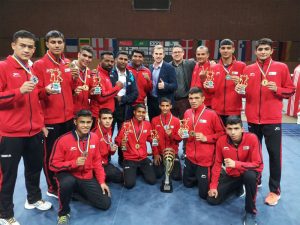