Prime Minister Narendra Modi will inaugurate the 3rd Global Potato Conclave-2020 at Gandhinagar in Gujarat. The four-day will provide an opportunity to bring all stakeholders at one common platform. Gujarat is one of the leading producers of Potato in the country.

Netherland is the partner country. The four-day mega event will have three major components, which include the Potato Conference, the Agri Expo, and Potato Field Day.

It is a unique event to expose different stakeholders of the country to the frontiers of knowledge and innovations in potato research. The 100 foreign delegates of 14 different countries expected to participate in this conference. This conference is organized by the Indian Potato Association (IPA) in collaboration with the Indian Council of Agricultural Research ICAR, Central Potato Research Institute, Shimla, and International Potato Center, Lima. Peru.

The day aims to create a suitable environment to promote Hindi worldwide and to present Hindi as the prevalent language of the world.

Unique programs for Hindi on various subjects are organized in all government offices.

India tightens export policy for the rice to EU countries

The Ministry of Commerce and Industry amended the export policy for rice export to the European Union (EU) members.

India’s rice export to European countries dipped to around 40% in 2018-19 due to the issue of maximum residue level (MRL) in pesticides. Currently, the market is likely to shrink further in 2020 as rice samples have failed the mandatory testing.

The Forest Advisory Committee approved a Green Credit Scheme that will allow the forest to be traded as a commodity.

Under the Green Credit Scheme, the Forest Department is allowed to outsource to non-government/private agencies.

The scheme is in line with the Green India Mission that aims to achieve its target of 2.523 billion tonnes of carbon by 2020-30. It involves adding 30 million hectares in addition to an existing forest.

The Citizenship (Amendment) Act has come into effect from 10 January.

The Centre has issued a gazette notification in this regard.

The notification said, the Central Government appoints the 10th day of January, 2020 as the date on which provisions of the Act will come into force.

According to the Act, members of six minority communities who have come to India from Pakistan, Bangladesh and Afghanistan till December 31, 2014 facing religious persecution there will not be treated as illegal immigrants.

They will be given Indian citizenship.

These communities are of the Hindus, Sikhs, Buddhists, Jains, Parsis and Christians.

This index tracks the progress of Energy Efficiency (EE) initiatives in 36 states and union territories based on 97 significant indicators.

The State Energy Efficiency Index categorises states as ‘Front Runner’, ‘Achiever’, ‘Contender’ and ‘Aspirant’ based on their efforts and achievements towards energy efficiency implementation.

The top performing states in the State EE Index 2019 – Haryana, Kerala and Karnataka – are in the ‘Achiever’ category.

There isn’t any ‘frontrunner’ state, it can be inferred that a lot more can be done at the state level to realise energy savings from energy efficiency. 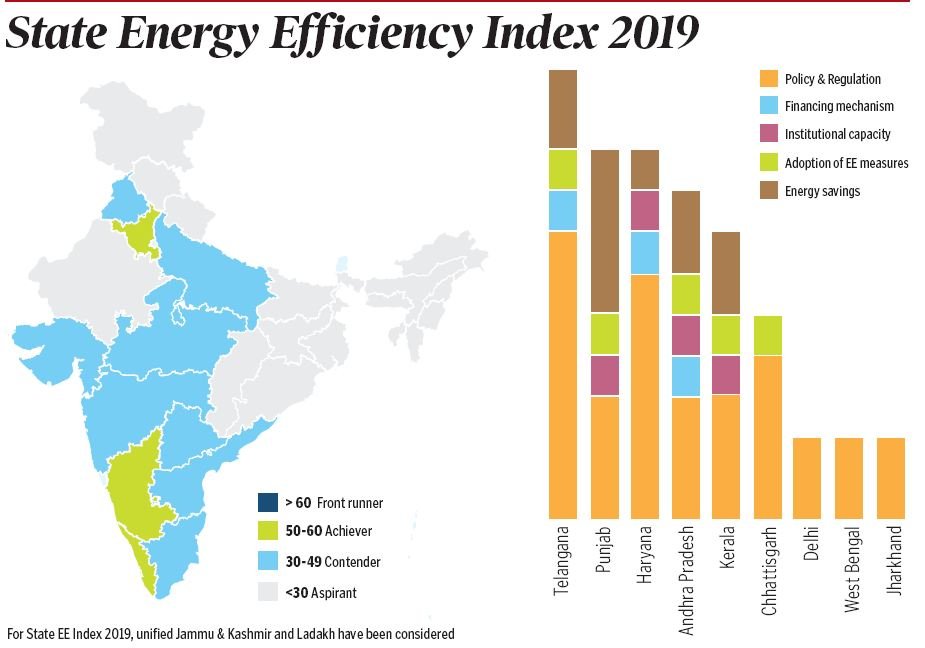