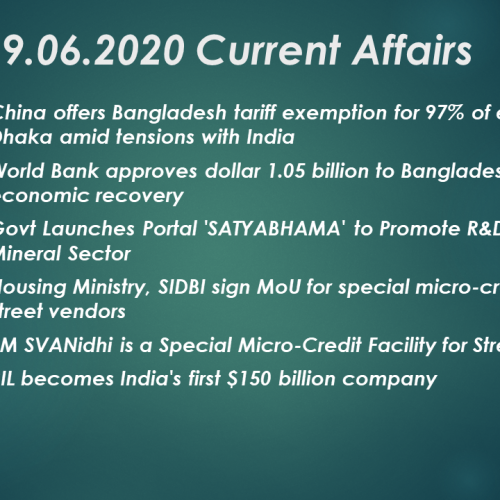 After the government notification merging several areas such as Bopal-Ghuma, Chiloda-Naroda and Kathwada into the Ahmedabad Municipal Corporation (AMC), the AMC announced that Bopal-Ghuma will now be a part of its South West Zone, which also includes Jodhpur, Maktampura, Sarkhej and Vejalpur wards.

The AMC also said that the areas of seven gram panchayats merged with the city will be included in the adjacent zone. For example, the notified parts of Sanathal and Visalpur will be in the South West Zone while those of Khodiyar will be in the North West Zone.

In a bid to woo Bangladesh, China has provided a huge trade boost to the country by announcing tariff exemption for 97 per cent of Bangladeshi products effective from July 1.

The decision has come one month after Bangladesh Prime Minister Sheikh Hasina and Chinese President Xi Jinping held a discussion to upgrade their bilateral relations during the COVID-19 pandemic.

With this announcement, a total of 8,256 Bangladeshi products will come under the 97 percent of products that would be exempted from tariff.

The World Bank has approved dollar 1.05 billion for three projects in Bangladesh to create quality jobs and accelerate economic recovery in the wake of the Corona pandemic.

These projects will help the economy in bouncing back by creating more and better jobs and promoting direct private investment in specialized economic zones.

The mines ministry announced the launch of a portal “SATYABHAMA” with an aim to promote research and development in the mining and minerals sector.

This portal will allow online submission of project proposals along with monitoring of the same and utilisation of funds.

The portal has been designed, developed and implemented by the National Informatics Centre (NIC), Mines Informatics Division.

The portal will increase efficiency and effectiveness in the implementation of the scheme.

PM SVANidhi is a Special Micro-Credit Facility for Street Vendors.

According to the MoU, PM SVANidhi Scheme will be implemented by SIDBI under the guidance of MoHUA.

The credit guarantee to the lending institutions would also be managed by the SIDBI through Credit Guarantee Fund Trust for Micro and Small Enterprises (CGTMSE).

The scheme targets to benefit over 50 lakh street vendors, who had been vending on or before 24th March this year, in urban areas. The duration of the scheme is till March 2022. The street vendors belonging to the surrounding peri-urban or rural areas are being included as beneficiaries under the urban livelihoods programme for the first time.

The vendors can avail a working capital loan of upto ten thousand rupees, which is repayable in monthly instalments in the tenure of one year. On timely and early repayment of the loan, an interest subsidy at the rate of seven per cent per annum will be credited to the bank accounts of beneficiaries through Direct Benefit Transfer on six monthly basis.

In order to ensure fast implementation of the scheme with transparency, a digital platform with web portal and mobile app is being developed to administer the scheme with end-to-end solution. The IT platform will also help in integrating the vendors into the formal financial system.

The Reliance Industries Limited (RIL) has reached a $150-billion mark in terms of market capitalization.

Mukesh Ambani, chairman and managing director of Reliance Industries (RIL) has entered into the list of world’s top 10 richest, according to the Forbes Real-Time Billionaire list.